Little wonder that Saudi Arabia is known as the Middle East's most prominent social media market. This is due to some key factors that vary between religious, political and cultural that influence the use of social media in the region. Saudi Arabia and social media usage are just growing in parallel. Let’s see this in numbers why Saudi are commonly described as ‘hyperconnected’. 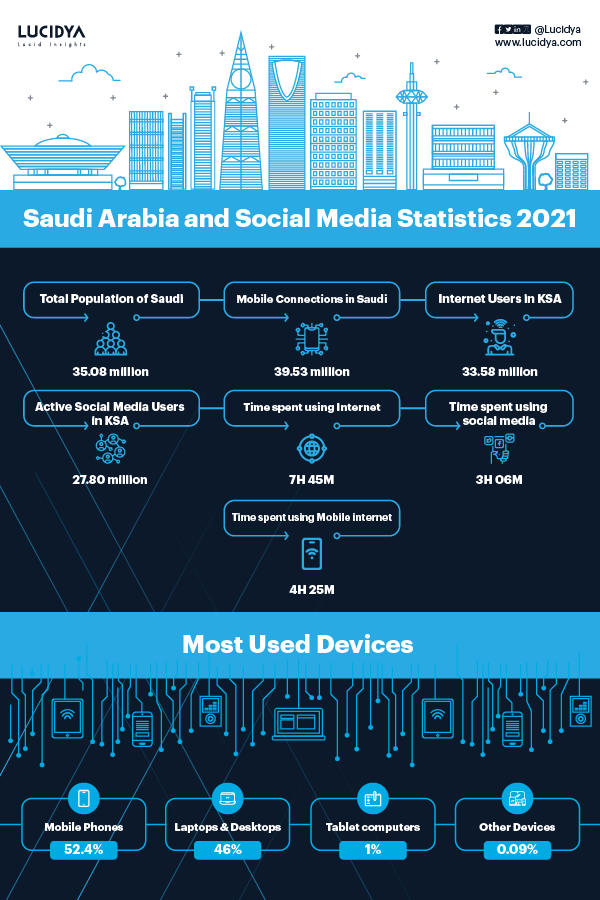 Out of the total population, 39.53 million have mobile connections, and the number of internet users comes to around 33.58 million constituting 95.7% of the population. This has an annual increase of around 4.2%. Herein, the active social media users exceed 27.80 million; that is 79.3% of the population. In terms of individual social media accounts, the country scored 7th in the globe. Tabuk area has the highest percentage of social network users with 97.1% of its population using social media.

52.40% of Saudis use mobile phones the most, while the other half uses Laptops and Desktops, Tablets and other devices in proportions distributed in a row; ( 46%, 1% and 0.09%).

Most used Browsers In Saudi Arabia

While Chrome is the most widely used browser in Saudi Arabia with a share of 82%, other browsers are also used, for example, Safari (6.7%), Firefox(2.7%), Samsung Internet (2.90%), Microsoft Edge (2.40%), Opera (2.30%), Internet Explorer (0.4%). When it comes to the top websites visited based in total traffic volume, Google.com occupies the leading position with an almost (293M) visit with the most common queries being evolved around ( مدرستي، تويتر، مدرستي منصة، أذان، مترجم، يوتيوب، سبق).

The Most Used Mobile Apps in Saudi Arabia

The Most Downloaded Mobile Apps

TikTok has the highest number of downloads in Saudi Arabia, and WhatsApp and Snapchat are the next in position. Other apps are as follows:

Saudi Arabia's social media users climbed from 25 million to 27.8 million between 2020 and 2021. Content varies on the different social media platforms to include music, lifestyle and travel with more events and trends knocking the Twitter platform.

Social Customer Care: The Ultimate Guide To Delighting Your Customers